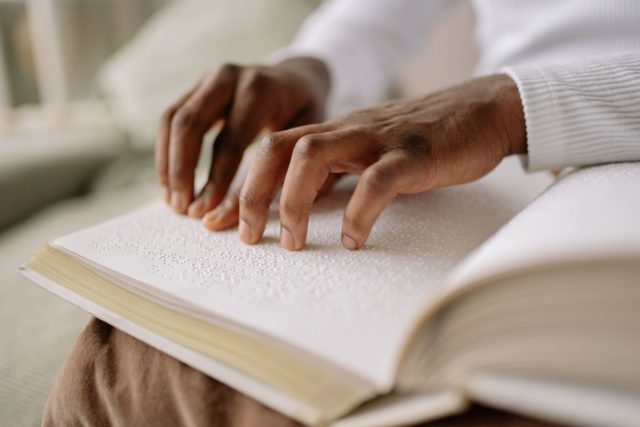 Braille is a writing system that allows blind people to read by passing their fingertips over a combination of embossed dots. It is not a language, but an international alphabet that can express letters, numbers, and even musical notes. If you wish to adapt your texts for visually impaired people, you should hire a translation company.

The invention of the braille system

This method of writing was devised in the 19th century by the Frenchman Louis Braille, who lost his sight when he was a child. His disability didn’t stop him from being a good student. Based on a tactile code used by soldiers to communicate during war, young Braille designed and perfected a combination of six points representing basic phonetics.

His method was met with some reluctance at first, but Braille’s blind peers sneaked around in school, interpreting and writing their own messages. It was easier to use than other signs that had been attempted years earlier, as this form was psychologically more intuitive.

As an adult, Braille became a teacher. He did not imagine the scope of his creation, as he died at the age of 43, before his alphabet became international.

What does the braille system consist of?

You’ll probably wonder if the braille system can be adapted to different languages. Of course! It is a binary code consisting of a six-point rectangle, each combination of points representing different characters: letters, numbers, punctuation, and other signs.

These embossed dots create a mental image of phonemes. Of course, these phonemes can express different languages, including Chinese or Japanese, which are precisely symbol-based. However, in each language there are specific adaptations.

Blind people are able to read at a rate of 125 to 175 words per minute by passing their fingers over the symbols. A slate with a stylus that marks each dot on the paper is used to write in braille. It may also be learned and used by people who can see.

The importance of integration and accommodation in society

Imagine getting into an elevator and not being able to push the button for the floor you want to go to. It is imperative that we become aware of the need for integration of the visually impaired. To achieve this, all public signs, including elevator buttons, must be adapted!

Blind people develop greater acuity in the senses of hearing and touch. Acoustic traffic lights and embossed steps prevent possible accidents and facilitate mobility. Today, this is something that is being implemented in most cities, but there is a long way to go when it comes to adapting paper money, signage, textbooks, and official documents.

Professional translators play a key role so that everyone, no matter what language we speak, can communicate, understand, and read any message. Hire us!

How do you translate a Shopify store?
Related Posts
Culinary translation
Translating advertising campaigns – the path to success
Challenges of Scientific Translation: How Do We Overcome Them?
Translation of Corporate Videos, an Ally for International Expansion